In-rack sprinklers are used when ceiling sprinkler only protection is no longer adequate to protect the rack stored commodities. Well known disadvantages of current in-rack sprinkler designs are (1) additional costs and (2) additional risks of damage of the sprinkler heads during loading and unloading of the racks. Next generation in-rack sprinklers have been UL-tested that are expected to improve on conditions on both fronts.

A new in-rack sprinkler system design1 has been evaluated in a series of fire tests at the Underwriters Laboratories. These next generation in-rack sprinkler designs are based on a k-factor of K-25.2 and are modified with a pendent sprinkler deflector designed to distribute water droplets across the shallow space available in a rack.

The anticipated results are that these modified extended coverage sprinkler heads can be spaced apart further horizontally due to their wider coverage area and vertically due to the modified droplet distribution of the larger K-25.2 heads. This in turn is expected to reduce installation costs, because less sprinkler heads and less (water) piping need to be installed. Also extended coverage in-rack sprinkler configurations eliminate the need for face sprinklers thus significantly reducing the potential for damage of the in-rack sprinkler system. In addition, only in-rack sprinklers in longitudinal flue spaces were installed.

Perhaps most importantly, the required water demand of the resulting in-rack sprinkler system is sharply reduced (up to 60% reduction) when compared to an equivalent ESFR system. In many cases, and usually an issue in older municipalities where city water pressures are low, this will avoid purchasing and maintaining an expensive fire pump to operate an ESFR system.

A series of full-scale fire tests2 have been performed to evaluate these new in-rack sprinkler system designs. Objectives for these fire tests include:

The following high-hazard commodities were tested: 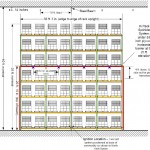 The tested or proposed sprinkler configurations based on extended coverage in-rack sprinklers have not been adopted in any of the model codes as of yet. However, if the storage scenario at hand is similar to the successfully tested storage configurations, then these new protection schemes may be reviewed by the AHJ as an ‘alternative means and methods’ to the prescribed regulations.